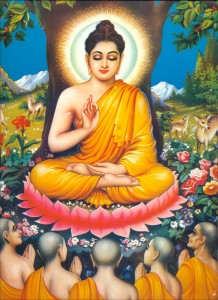 1. The Truth of Suffering

1) Suffering of Suffering: This refers to things such as headaches and so forth. Even animals can recognize this kind of suffering and, like us, want to be free from it. Because beings have fear of and experience discomfort from these kinds of suffering, they engage in various activities to eliminate them.

2) Suffering of change: This refers to situations where, for example, we are sitting very comfortably relaxed and at first everything is all right, but after a while we lose that feeling and get restless and uncomfortable.

In certain countries, like India, we see a great deal of poverty and disease: these are sufferings of the first category. Everybody realizes that these are suffering-conditions to be eliminated and improved upon. In many Western countries there may not be so much problem of poverty, but where material facilities have been highly developed there are different kinds of problems. At first we may be very happy, having overcome the problems that our forefathers faced, but as soon as we have solved certain problems, new ones arise. We have plenty of money, plenty of food and good shelter, but by over-estimating the value of these things we render them worthless. This sort of experience is the suffering of change.

A very poor, underprivileged person might think that it would be wonderful to have an automobile or a television set, and should he acquire them, at the beginning he would feel very happy and satisfied. Now, if such happiness were something permanent, since he had the car and the TV set his happiness should remain forever. But it does not; it goes. After a few months he wants another kind of car; if he has the money he will buy another kind of television set. The old ones, the same objects that before gave him so much satisfaction, now cause dissatisfaction. That is the nature of change; that is the problem of the suffering of change.

3) All-Pervasive Sufferings: Because it acts as the basis of the first two categories of suffering, the third is called, in Tibetan, kyab.pa.du.ched.kyi.dug.ngel (literally: the suffering of pervasive compounding). There may be those who, even in developed Western countries, want to be liberated from the second suffering, the suffering of change. Bored with the defiled feelings of happiness, some seek the feeling of equanimity: this may lead to rebirth in, of the three realms, the upper realm that has only the feeling of equanimity.

The Three Principal Aspects of the Path by Lharampa Tashi Gyatso